The January 28th 2017, broadcast of Japanese TV show, BuraTamori was about Mito of Ibaraki Prefecture, a city to the northeast of Tokyo.

About the City of Mito and Mito Koumon

“Why is Mito Koumon so popular?” 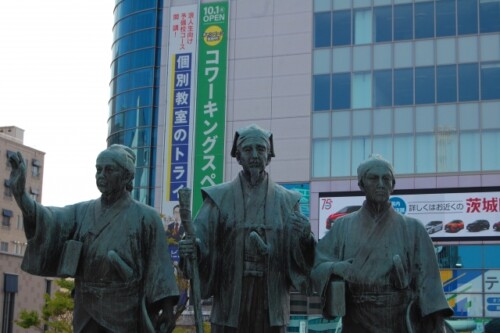 Mito Koumon is a historical figure who was leader of the Mito area in the 1600s. The name of the province, the name of the current city, and the last name of Mito Koumon are all the same “Mito”. Many television drama series are made in Japan about his travels around Japan, but in reality, it is said that he usually remained in his homecity of Mito in his life. Then, why is he so famous for walking throughout Japan and punishing vice?

The program explores this mystery in the city of Mito, which is a city in the Kanto region which includes Tokyo and Yokohama. Mito is about 1 or 2 hours by car from the center of Tokyo.

“Koumon” of Mito Koumon is actually the name of his position as leader of government, and his real name is Tokugawa Mitsukuni, also known as Mito Mitsukuni. He is the grandson of the famous Tokugawa Ieyasu who united Japan in 1603 and became Shogun (head of all samurai) to start the Edo Shogunate which ruled Japan for more than 250 years until the 1860s.

The guide of this episode is Mr. Sekiguchi Yoshihisa, who is member of Mito City Board of Education. Sekiguchi protects cultural properties at the Cultural Properties section, and in his private life, his hobby is to visit graves.

Mitsukuni was a grandchild of Tokugawa Ieyasu who united Japan after more than 100 years of war. Mitsukuni was head of the “Mito Tokugawa family” which was one of the three important families of the Tokugawa family after the main family line of eldest son of Ieyasu.

Tamori and his crew visit the ruins of Mito Castle near JR Mito Station.

The Mito Castle was rather simple to be the residence of such an important family, but it was lost in the fires of World War II.

Today, Mito First High School is built on the grounds of Mito Castle.

Inside its grounds, there is a gate called “Yakuimon” which remains from the 1500s.

This gate has never been rebuilt for 500 years.

In fact, the moat and earthen walls of the Mito Castle were also not rebuilt from the 1500s during all the years of the Tokugawa Shogunate (1603-1867).

This was because the Mito Province always had financial difficulties. The castle was also simple for this reason. When the castle existed, people used to call it the “Sankai yagura” (three-story turret).

Why was the Mito Province so poor?

The reason for the financial difficulty of the Mito Province was the obligatory stay in Edo (former name of Tokyo) of many soldiers and government officials.

The lifework of Mitsukuni was the compilation of the “Dainihonshi”.

“Dainihonshi” means the great Japanese history. It is a history book which Mito Mitsukuni started to compile around 1657. The compilation took 250 years until 1906. There are 402 volumes describing the reigns of the Japanese emperors from the first to the 100th generation.

The lifework of Mitsukuni was the compilation of the “Dainihonshi”.

“Dainihonshi” means the great Japanese history. It is a history book which Mito Mitsukuni started to compile around 1657. The compilation took 250 years until 1906. There are 402 volumes describing the reigns of the Japanese emperors from the first to the 100th generation.

This is where the documents of “Dainihonshi” are kept.
The Kodokan is open to the public only for four days during the Plum Festival in February or March. 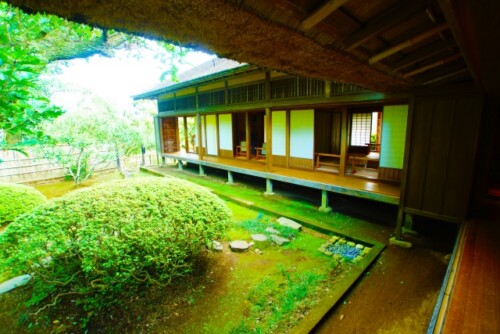 Kairakuen Garden, one of the three great gardens of Japan, was established in 1842, one year after the Kodokan school. Kodokan and Kairakuen are in the same grounds. Today, Kairakuen is much more popular among tourists, but it was originally an auxiliary facility of the large Kodokan school.

Tokugawa Nariaki, the leader of Mito Province 7 generations after Mitsukuni, built the Kodokan school and Kairakuen garden. He considered that education and culture was most important for the growth of the province.

[Who is Tokugawa Nariaki?]

At Kairakuen, the garden is organized with the theme of “Icchou Isshi” meaning “one strain, one relaxation”. It means that relaxation of the mind after the stress of learning is important. 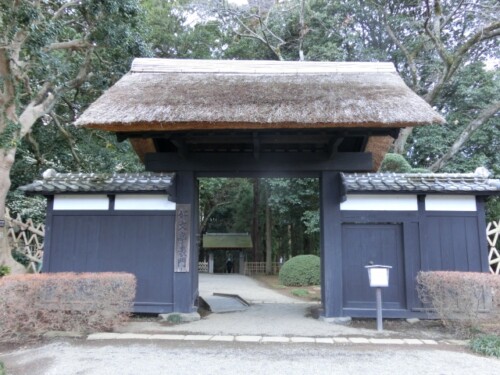 This theme is seen on the street that goes through the large garden, where bamboo groves (showing strength) and plum groves (showing relaxing flowers) are planted one after the other at each gate.

In addition, the city of Mito today is famous for “natto”, a Japanese food with a unique flavor and texture often disliked by foreigners, but loved by many Japanese people. It is said that the natto of Mito became famous because it was served as a souvenir for sightseeing in the plum groves of Kairakuen.

Under the government of Mito Mitsukuni (Mito Koumon), the population of the city grew and the castle town was to be expanded. At this time, the construction of a waterway was planned in Mito.

The next guide is Professor Toshio Ando (Professor of Geology and Paleontology, Ibaraki University).

He guides the crew to the water source of the Kasahara Suido (Waterway) built by Mito Mitsukuni. Mitsukuni took good care of this place because it was an important source of water for the city. To maintain the water clean, Mitsukuni issued the ban of eating food, especially meat, and drinking alcohol near this place. People still come to collect clean water today.

The Kasahara Waterway coming from this source of water had stone water pipes (culvert) to bring water to the castle town. Because the pipes ran through wetlands, the pipes were designed to have small gaps to intentionally draw in the spring waters in the wetlands.

The stones used for the Kasahara Waterway came from mines in the Mito Province where traces of chisels used in the 1600s still remain.

The stone is called tuffaceous mudstone, which is clay from the seabed containing volcanic ash solidified over many years.

It is a relatively light stone, so it was easy to carry. Also, it does not sink into the wetlands, so it was convenient for this land.

The July 20th 2019, broadcast of Japanese TV show, BuraTamori was about the Kushiro Wetlands in Hokkaido, Japan. The ...

The January 30th 2016, broadcast of Japanese TV show, BuraTamori was about the Matsuyama City of Ehime Prefecture, Japan...

The 2016 June 10th and 17th, broadcast of Japanese TV show, BuraTamori was about Nagoya City of Aichi Prefecture, Japan....
Advertisement
Why did Tokugawa Yoshinobu become Shogun? The 15th and final king of the Tokugawa Shogunate
Who is Tokugawa Nariaki? Father of the last Shogun