The July 20th 2019, broadcast of Japanese TV show, BuraTamori was about the Kushiro Wetlands in Hokkaido, Japan.

“What makes the Kushiro wetlands special?”

About the Kushiro Wetlands

The “Kushiro wetlands” is so large that the Yamanote Train Line, which runs in a loop in the Tokyo urban area, fits completely into the land.

Wetlands usually become forests when trees grow thick as time passes, but Kushiro wetlands is a rare land that has been preserved as wetlands for 4,000 years.

The program explained the secrets of this extraordinary land. 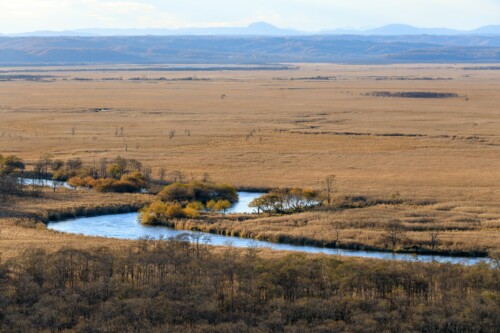 The origins of Kushiro wetlands

The program begins from the “Hosooka Observatory” where there is a magnificent view of the vast wetlands.

Kushiro wetlands is the largest wetlands in Japan and covers an area of 227 square kilometers. Kushiro wetlands accounts for about 30% of the wetlandsland area in Japan. It is 30 times larger than the famous Oze wetlands of the Gumma prefecture, which is closer to Tokyo.

How was such a large wetlands formed in Kushiro?

In fact, the Kushiro wetlands area was under the sea before it became wetlands.

About 6,000 years ago, the sea level lowered, and a sand dune was created at the entrance to the bay where Kushiro City and the wetlands are located today. It seems that the wetland was completely formed by 4,000 years ago, and a landscape similar to that of today has existed ever since then. It is quite rare in the world that a wetland is maintained in this form for 4,000 years.

In 1980, the Kushiro wetlands was registered to the Ramsar Convention, as the first Japanese wetlands to be registered.

The trains of Senmou Main Line running through Kushiro wetlands 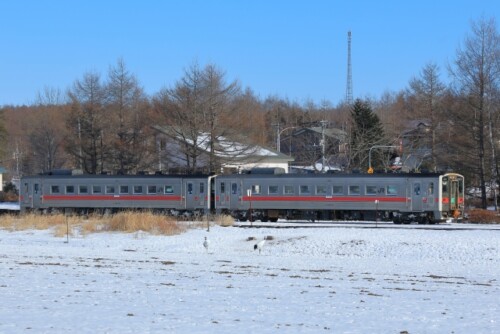 The next site is a station on the Senmou Main Line, the train line that runs between the 2 main cities of eastern Hokkaido, Kushiro and Abashiri.

The crew spots a water spring near the station.

The land of Kushiro wetlands was once the bottom of the sea, so it is mainly made of sand layers. From this layer of sand, soaked rainwater comes out as spring water. There are more than 20,000 springs around the Kushiro area. Some of them produce up to 20 tons of water each day. These springs provide abundant water supply to the Kushiro wetlands.

The Senmou Main Line runs the border between the wetlands and the hills, which was the coastline of the sea 6,000 years ago. Then, it goes on to pass through the wetlands, where the landscape of the wetlands can be seen from both sides of the train. 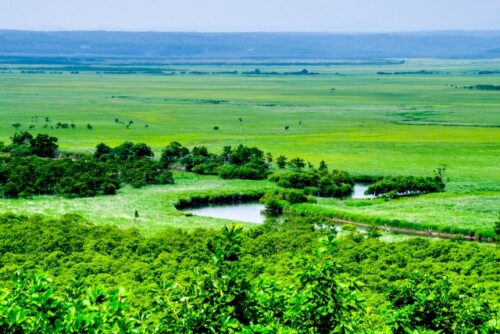 In addition to abundant spring water, “rivers” are important to provide water to the wetlands.

“Kushiro river” is the main river that goes through the Kushiro wetlands.

The flow of the Kushiro River is very gentle and the water surface is like a mirror. It even seems as if there is no flow fo water at all. This is because there is almost no height difference of the land. Water will flow if there is even a slight difference in height, but in Kushiro wetlands, the difference of height is only 1 meter across 4 kilometers of land. A characteristic of such slow rivers is that it easily changes direction to the left and right.

When it rains, the water level rises and the river overflows at its curves, flooding the ground.

The crew enters the banks of the river with special permission.
Water ooze out from where they step on and their feet get stuck.

Why doesn’t Kushiro wetlands dry up or become forest?

In Aso’s grassland, which I introduced before in another episode of Buratamori, forestation has been prevented by human hands by burning the fields every year from ancient times.

How is forestation prevented in the Kushiro wetlands?

Kushiro wetlands, some trees grow along the river, but then, you can see that they are naturally withering before they grow. The wetlands and the forest are in constant competition for survival, and the wetlands is “winning”.

This seems to be the biggest feature of Kushiro wetlandsland.

So why can the wetlands win against the forest here? The crew head to the west of Kushiro wetlands to explore the mystery.

On the way, they encounter a family of Japanese cranes on the way.

The west side of Kushiro wetlands is a protected area, where humans cannot enter without special permission.

The west area is a grassy field with no trees around, which shows that the wetlands are “winning completely” against forestation.

The ground is so swampy that they sink just by walking.

Further into the area, they come to an area that does not sink.

However, when they jump on the ground, the whole ground shakes.

Furthermore, when they jump near the creek, bubbles pop up in the creek. The underground air is being pushed out towards the river. This is not an ordinary phenomenon.

Digging up the soil of this area with special permission, fibrous soil is seen.

This is organic soil called peat. Peat forms from a pile of withered plants that have become fibrous without being completely decomposed. Peat is born because the microorganisms in the soil are not so active due to the coldness of Hokkaido.
Peat is like a sponge that sucks water, so the ground is spongy containing water and air. Trees cannot grow well in this kind of ground, so there are no trees in the west area of Kushiro wetlands.

On the east side, there was normal soil that the river carried, making it possible for some trees to grow.

The peat layer of Kushiro wetlands have stacked up for 4 meters underground. It takes about 10 years to compile 1cm, so it takes 4000 years to reach a 4-meter layer. In other words, peat has accumulated since the birth of the wetlands.

The peat that accumulates throughout the wetlands collapses like jelly at the bottom of the puddles seen everywhere.

The peat land always contain water, so rivers tend to overflow easily on peat land. When it rains, the river overflows and the course of flow changes easily.

An investigation on the course flow of past rivers in the wetlands, the traces spread like capillaries throughout the Kushiro wetlands.

Furthermore, on the west side of Kushiro Wetland, the altitude is lower on the mountain side than on the sea side, so the river flows toward the mountains.

4,000 years ago, when the wetlands were formed, the sand dunes that blocked the sea cove became so high that it became such terrain.

In this way, the water of the river on the west side flows first towards the mountains, and then flows into the Kushiro River which flows towards the sea.

The abundant water in the soil makes the rivers change direction frequently with flooding. Even if trees grow, if the river changes its flow into the trees, the trees will rot and die. In this way, even if some trees grow, the river resets it to the grass of the wetlands.

The condition of the wetlands has been maintained by repeating this for 4000 years.

Another miracle from Kushiro wetlands: “Fog of Lake Mashu”

“Fog” is another famous aspect of the Kushiro area.

Furthermore, the crew visits Lake Mashu, famous for its beautiful blue color and the thick fog that usually covers the lake. 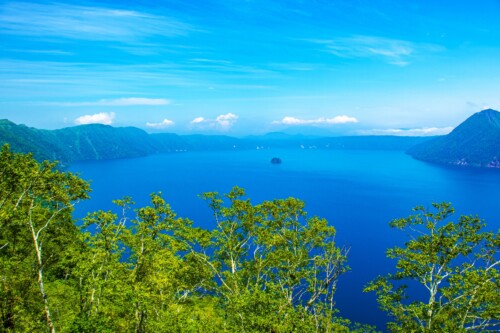 Lake Mashu is far from the sea, 80km inland from the Kushiro wetlands.

But why does the fog reach and cover the lake?

The Kushiro wetlands is also involved in this phenomenon. When the mist passes through the Kushiro wetlands, the amount of mist increases due to abundant moisture from the wetlands. It reaches Lake Mashu and creates a spectacular view of Lake Mashu’s fog, which was sang in a famous Japanese song in the 1960s.

The 2016 June 10th and 17th, broadcast of Japanese TV show, BuraTamori was about Nagoya City of Aichi Prefecture, Japan....

The January 30th 2016, broadcast of Japanese TV show, BuraTamori was about the Matsuyama City of Ehime Prefecture, Japan...
Advertisement
Why did Tokugawa Yoshinobu become Shogun? The 15th and final king of the Tokugawa Shogunate